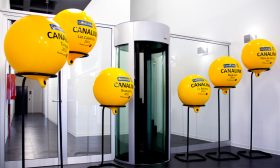 Infinera has announced a successful subsea field test with Canalink across its subsea cable. The test, conducted with the Infinera Infinite Capacity Engine (ICE4) and featuring Infinera’s fourth-generation photonic integrated circuit, demonstrated the capability to upgrade the cable capacity by a factor of 13.

The test was conducted on Canalink’s 1,400-km subsea cable, linking the Conil landing point on the Spanish mainland with Tenerife in the Canary Islands. Conducted across three fully-loaded channel plans at 37.5, 50 and 25 GHz channel spacing, the test validated advanced compensation techniques and new modulation schemes.

These included: software-programmable quadrature phase-shift keying and 8QAM; Nyquist subcarriers, which offer an approximately 20% increase in reach compared to single-carrier transmission; and soft-decision forward error correction gain sharing, in which high-performance carriers can be paired with lower-performance carriers, mitigating the effects of optical non-linearities and increasing system capacity.

‘More capacity’
“The successful field test with Infinera demonstrated that we can achieve approximately 13 times more capacity than we initially estimated on our subsea link,” said Carlos Suárez, General Director of Canalink. “Infinera’s Infinite Capacity Engine and its innovative technology designed for subsea operators prove that its deployment can enable us to protect our investment and maximise the use of our infrastructure.”

“Infinera is committed to bringing advanced capabilities to the subsea market, and we are pleased to enable Canalink to maximise capacity on their systems,” said Scott Jackson, Infinera Vice President, Subsea Business Group. “This test validates the benefits of ICE4 Nyquist subcarriers and SD-FEC gain sharing, enabling subsea cables to move to higher modulation formats for increased fibre capacity and greater return on the asset.”

Canalink, a subsidiary of the ITER group, owns a system of undersea fibre optic cables that link the Canary Islands with the Iberian Peninsula and the western coast of Africa. Canalink also has exchange agreements with other operators, and participates in undersea cable consortia aiming to connect Europe with Africa, transforming Tenerife, and the D-Alix datacentre specifically, into a node for the massive exchange of neutral data traffic.