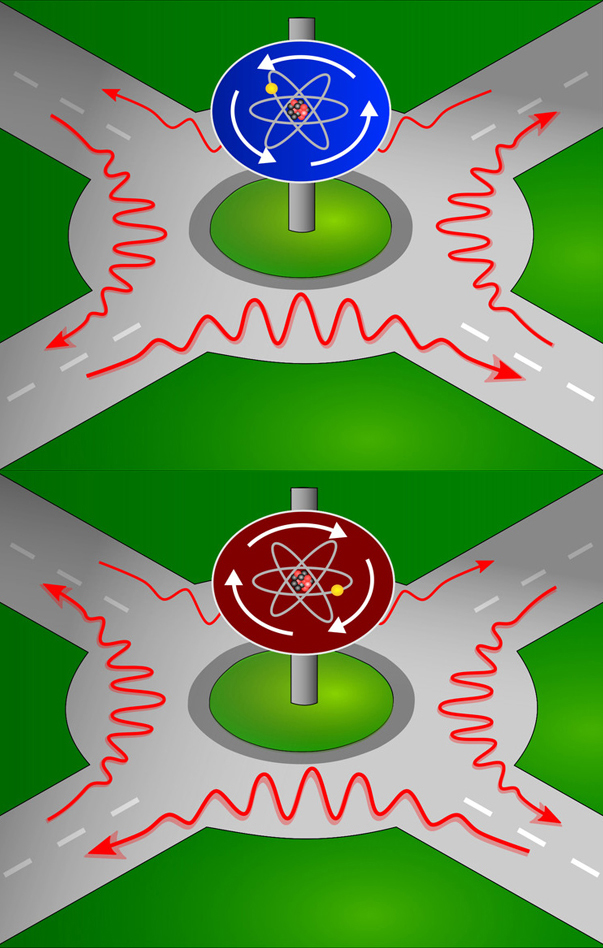 As with vehicular road traffic, crossings are indispensable in optical signal processing. In order to avoid collisions, a clear traffic rule and route is required. A new method has now been developed at the Technical University of Vienna, Austria (“TU Wien”) to provide such a rule for light signals. For this purpose two glass fibers were coupled at their intersection point to an optical resonator, in which the light circulates and behaves like cars on a roundabout.

A single atom coupled to the resonator defines the direction of circulation. The atom also ensures that the light always leaves the roundabout at the next exit. This rule is still valid even if the light consists merely of individual photons. Such a roundabout will consequently be installed in integrated optical chips – an important step for optical signal processing.

Signal processing by light
The term optical circulators refers to elements at the intersection point of two mutually perpendicular optical fibers which direct light signals from one fiber to the other, so that the direction of the light always changes, for example, by 90° clockwise. “These components have long been used for freely propagating light beams,” said Arno Rauschenbeutel from the Vienna Center for Quantum Science and Technology at the Institute of Atomic and Subatomic Physics at TU Wien.

“Such optical circulators are mostly based on the so-called Faraday effect: a strong magnetic field is applied to a transparent material, which is located between two polarization beam splitters which are rotated with respect to each other. The direction of the magnetic field breaks the symmetry and determines in which direction the light is redirected.”

However, for technical reasons, components that make use of the Faraday effect cannot be realized on the small scales of nanotechnology. This is unfortunate as such components are important for future technological applications. “Today, we are trying to build optical integrated circuits with similar functions as they are known from electronics,” said Rauschenbeutel. Other methods to break the symmetry of the light function only at very high light intensities or suffer from high optical losses. However, in nanotechnology one would like to be able to process very small light signals, ideally light pulses that consist solely of individual photons.

Rauschenbeutel’s team chose a completely different approach: they coupled a single rubidium atom to the light field of a so-called “bottle resonator” – a microscopic bulbous glass object on the surface of which the light circulates. If such a resonator is placed in the vicinity of two ultrathin glass fibers, the two systems couple to one another. Without an atom, the light changes from one glass fiber to the other via the bottle resonator. In this way, however, no sense of circulation is defined for the circulator: light, which is deflected by 90° in the clockwise direction, can also travel backwards via the same route, that is counter-clockwise.

In order to break this forward/backward symmetry, Rauschenbeutel’s team additionally couples an atom to the resonator, which prevents the coupling of the light into the resonator, and thus the overcoupling into the other glass fiber for one of the two directions of circulation. For this trick, a special property of the light is used at TU Wien: the direction of oscillation of the light wave, also known as its polarization.

If the rubidium atom is correctly prepared and coupled to the resonator, one can make its interaction with the light differ for the two directions of circulation. “The clockwise circulating light is not affected by the atom. The light in the opposite direction, on the other hand, strongly couples to the atom and therefore cannot enter the resonator,” says Arno Rauschenbeutel. This asymmetry of the light-atom coupling with respect to the propagation direction of the light in the resonator allows control over the circulator operation: the desired sense of circulation can be adjusted via the internal state of the atom.

Atomic state as quantum switch
“Because we use only a single atom, we can subtly control the process,” says Rauschenbeutel. “The atom can be prepared in a state in which both traffic rules apply at the same time: all light particles then travel together through the circulator in both clockwise and counterclockwise direction.” Luckily, this is impossible according to the rules of classical physics, as it would result in chaos in road traffic. In quantum physics however, such superpositions of different states are permitted which opens up entirely new and exciting possibilities for the optical processing of quantum information.