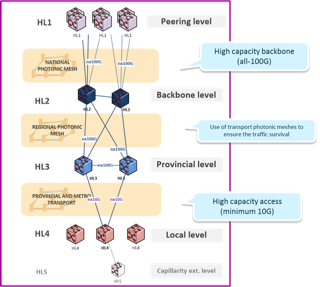 Telefónica is testing a 200-gigabit optical mesh network in Barcelona, adding to its existing optical mesh deployment across Madrid. Both mesh networks are part of the optical infrastructure that underpins the operator’s nationwide IP-MPLS network that is under construction.

The operator embarked on the new network to support the growth in video-on-demand and over-the-top streaming services. “In one year we are getting the same

figures as we got from internet traffic in the last nine years,” said Maria Antonia Crespo, IP and optical networking director at Telefónica.

Telefónica is deploying flexible rate 200-gigabit transponders at its Barcelona and Madrid networks. The same line cards will support 400-gigabit and even 1-terabit channels in future, as well as flexible grid to enable efficient use of a fibre’s spectrum.

The 200-gigabit transponders use 16-ary quadrature amplitude modulation (16-QAM). Such transponders have enough reach to span each of the two cities.

The ROADMs Telefónica is deploying in Madrid are directionless and are able to support up to 20 degrees. Barcelona will be the first location where the ROADMs will also be colourless and contentionless.

Juniper Networks and Nokia are suppliers of the IP router equipment, while Huawei and Nokia were chosen to supply the optical networking equipment. Telefónica has deployed Huawei’s Optix OSN 9800 platform in Madrid while in Barcelona Nokia’s 1830 Photonic Service Switch using the PSE-2 coherent DSP-ASIC technology is being deployed.

The mesh in Madrid is already completed while Telefónica is deploying optical rings around Barcelona while it tests the contentionless ROADMs. These deployments are aligned with the IP-MPLS deployment, said Crespo, set for completion in 2018.