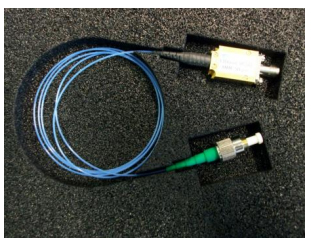 A data rate of up to 108 Gbit/s over above 100 m with 850nm multimode VCSEL was demonstrated in cooperation with Warsaw University of Technology using pulsed amplitude modulation (PAM) with 4 or 8 levels (4-PAM and 8-PAM). The presented results prove that high bit rate data interconnects can be realized utilizing the 850 nm VCSELs and PAM modulation, while SM VCSELs offer enhanced performance. Operation of PAM-8 was worse than of PAM-4. By combining PAM with trellis coding, received sensitivity was significantly improved, especially in a lower BER range.

A discrete multitone modulation (DMT) was applied to single mode 850nm VCSEL for data transmission of 112 Gbit/s over 100 m of multimode fibre. The demonstration was made in cooperation with Huawei, Hong Kong Polytechnic University and University of Science &Technology Beijing.

With duo binary 4-PAM modulation technology a maximum data rate of 160 Gbit/s (BTB) or 150 Gbit/s over 100 m of multimode fibre using multimode VCSEL have been demonstrated by Huawei. More than 2-dB performance gain is obtained by employing the novel 13-level duobinary signalling in contrast to the conventional 7-level duobinary 4-PAM signalling.