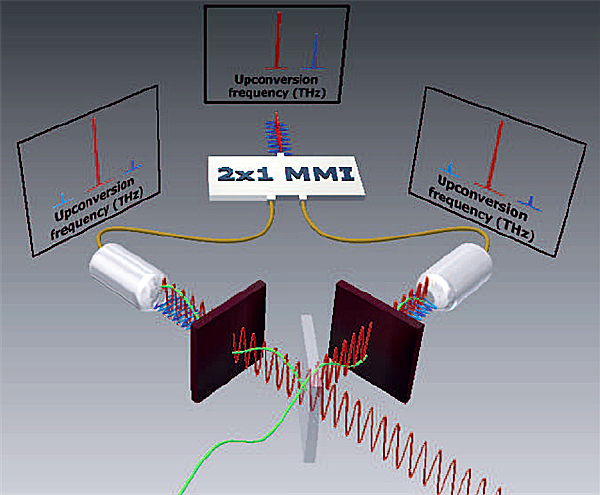 An ultrahigh speed, wireless communication network using THz instead of GHz frequencies is now one step closer. Researchers at Radboud University’s FELIX Laboratory (Nijmegen, Netherlands) have shown that it is possible to effectively transmit signal waves with THz frequencies through the existing fibre optic network.

HD television, big data, the internet of things and social media have considerably increased the data rate of wireless communication networks, and continue to do so. One way to facilitate this network growth is to use terahertz frequencies with high-speed data rates of up to 100 Gbit/s.

Current wireless data communication systems operate at an average speed of 100MB/s using microwave frequencies around 1GHz. For instance, GPS systems work with 1.3 GHz frequencies, wi-fi systems with 2.4 and 5.0GHz, and microwaves at around 2.45 GHz. In the search for free frequencies, the unexplored terahertz area is of great interest, say the researchers.

For wireless THz surfing on the Internet, it is necessary to connect THz wireless stations to the global fibre optic network. However, existing microwave techniques do not operate at THz frequencies. “THz is a difficult frequency region, because it is both electronic and optical at the same time,” said FELIX researcher Giel Berden. “It is too low for normal optics, and too high for standard electronics.”

Furthermore, THz signal waves in the fibre optic network are scrambled, because standard modulation of laser light generates two sidebands that interfere with one another. Optical single side band is a method to prevent this scrambling of information by selectively extinguishing one sideband.

Scientists at Radboud University’s FELIX Laboratory developed an OSSB modulator that enables wireless THz waves to be transmitted unperturbed through the fibre network. First author Afric Meijer explains, “With a specially designed beam splitter that splits both the THz waves and the infrared laser light in half, one of the two sidebands is reduced by a factor of over 60, while the other sideband’s intensity increases significantly.” The special modulator (see figure) does not contain any moving parts or colour filters, and operates over an ultra-wide bandwidth from 0.3 to 1THz.

The THz OSSB modulator is a by-product of the research by TeraOptronics on the THz laser FLARE (Free-electron Laser for Advanced spectroscopy and high-Resolution Experiments) at Radboud University. “The apparatus to determine the colour of FLARE’s laser light was exactly what was needed to observe THz OSSB,” Meijer explains.

“Both the special THz laser FLARE and Afric’s interest to expand communication with THz frequencies were imperative to make an impact in this field that was new to us,” said co-author Wim van de Zande, currently Director of Research at ASML.

As THz signals in the air are strongly absorbed by water vapour, wireless THz communication will mostly be used for relatively short distances. Meijer added, “Our THz OSSB modulator allows us to use the existing fibre optic network. Ultra HD and Virtual Reality images can be received or transmitted wirelessly through a THz link, just like the petabytes of data in research institutes and hospitals.”