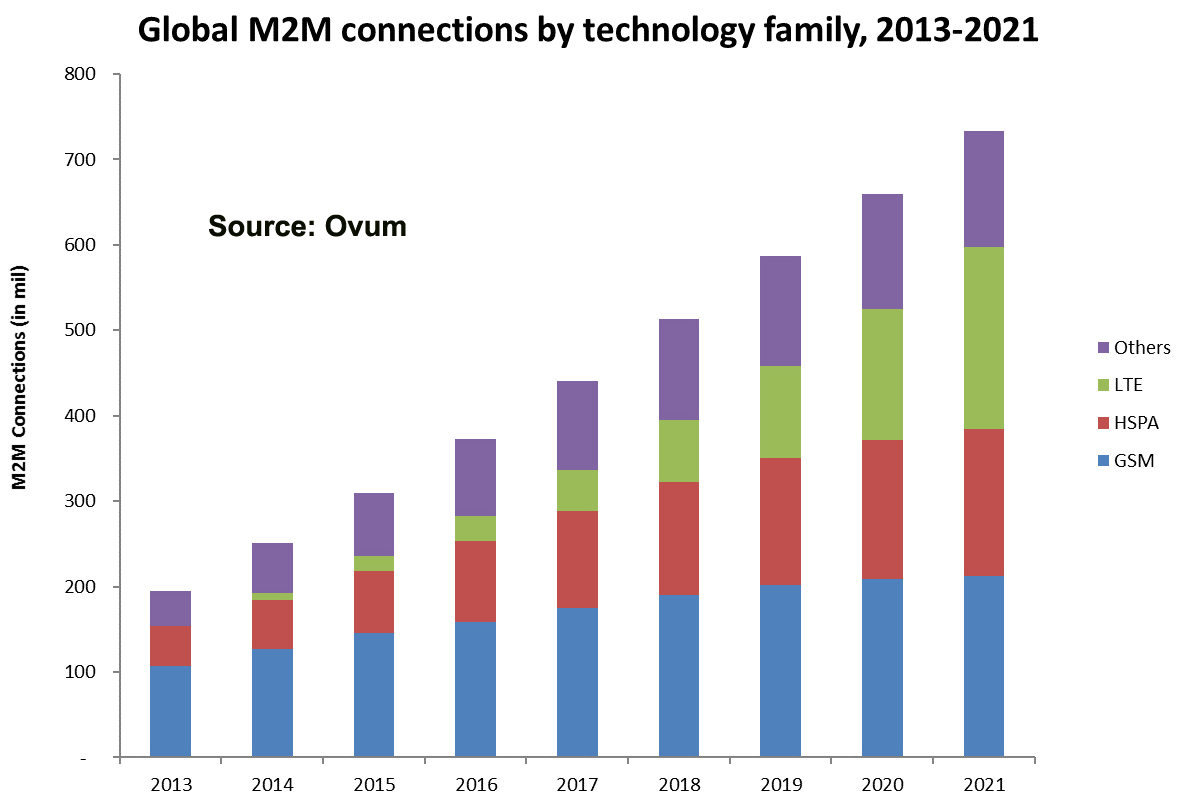 The greatest value contributions will come from Asia & Oceania, North America and Western Europe, worth $22bn, $16bn and $14bn, respectively. Ovum comments that many wireless carriers “will attempt to maximize their revenue opportunity by extending themselves beyond connectivity”, to which end Ovum also forecasts the proportion of revenue that carriers can expect from the various M2M service layers.

Ovum’s M2M forecasts incorporate data from all available carriers and National Regulatory Authorities (NRAs) and, for the first time, Ovum has forecast M2M splits by technology family – 2G, 3G and 4G. Of all current generations, LTE will be dominant in the long term, accounting for 212 million connections in 2021, it says, adding: “LTE is an exciting technology for machine communications, because unlike 2G and 3G it is tunable”.

LTE was designed for high-speed data, but it need not be used at its full-spectrum ability. In 2021, 2G and 4G will be at a point of parity, while 3G will account for 172 million connections. Yet, by this time, 2G and 3G will be plateauing, while LTE will be firmly in ascendance.

Ovum’s M2M expert Jamie Moss, Principal Analyst in IoT , commented, “Aggregating the data by technology family reveals interesting trends in M2M, the dynamics of which are quite different to those in consumer markets. Machine-type connections need to stay alive for many years and are not transitioned to new air interfaces as a matter of course. Doing so breaks the economics of deploying fully autonomous nodes. Instead, M2M contracts typically reach the end-of-life stage before any migration occurs. Consequently, 2G, specifically GSM, will persist for far longer in M2M.”

Pauline Trotter, Practice Leader for Ovum added, “Large carrier groups with established M2M businesses will not seek to switch off 2G until 2020 – and for some this will not be until 2025. But this decision is not merely for the sake of legacy support: 2G M2M connections will continue to be added, because 2G still represents the most affordable and internationally available form of coverage.”

Ovum’s key conclusions about market trends in this sector are as follow: Global cellular M2M connections will reach 733 million in 2021. This equates to approximately 8.1 percent of all forecasted cellular connections, up from 4.2 percent in 2015; during the five-year forecast period, total M2M service revenues will grow at a CAGR of 13.3% to reach a global annual total of $67bn in 2021; and service revenues will grow at the fastest rate in the later-to-start markets of the Middle East and Africa, where the CAGR for the region will be 16.7%.

Although both 2G and LTE are forecast to have approximately 212 million M2M connections by 2021, 2G like 3G will be plateauing with LTE firmly in ascendance. The increasingly competitive nature of the M2M market demands forecasts with greater segmentation and more accuracy. With the industry enjoying more transparency, due to an increasing number of carriers now reporting on M2M subscriptions, Ovum has taken the opportunity to apply its long-standing market-leading analysis to overhaul its forecast methodology, developing the most granular dataset presently available.