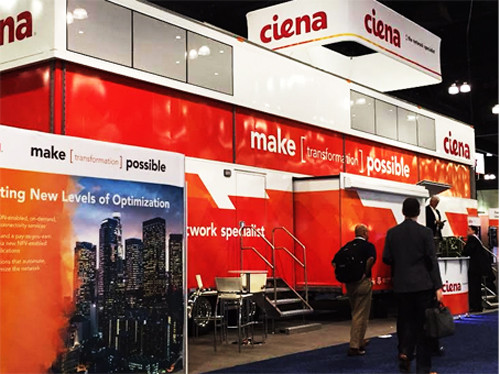 The study assessed virtualised applications, such as software-based managed services like routers, encryption, firewalls and WAN optimisation services, which have traditionally been based on dedicated hardware. The Ciena survey illustrates the investment plans and views of enterprises around virtualised service delivery and their key decision factors when selecting vendors and managed service providers to implement these technologies.

Almost all (93 per cent) respondents rate a mix of best-of-breed, interoperable virtual solutions as important or very important versus single-vendor solutions. This highlights the need for open, multi-vendor, multi-domain environments and unique partnerships that can deliver more disruptive, user-enabled services.

Speed of new service deployment was flagged as very important by 41 per cent of respondents, while more, 49 per cent, highlighted the importance of virtualised applications to support rapid expansion of company IT infrastructure to new business units, partners and branches.  This is in line with the drive to a DevOps-style approach to help modify new services and add new resources more quickly and easily.

So called “bill shock’ – the potential for run-away and unexpected costs resulting from an unplanned increase in the use of on-demand virtual services – is a significant concern. More than one third (37 per cent) of respondents still want a fixed monthly contract or a flat annual fee (34 per cent) to insulate from the costs of a demand spike.

Joe Marsella, CTO EMEA, at Ciena, commented, “Software and virtualisation, combined with new DevOps style approaches, are key components for flexible and adaptive ICT and they also essential to establish a more agile business culture. By enhancing services with virtual applications that appeal to enterprises, improve service velocity and incorporate the flexibility needed to build, trial and release applications more rapidly, the service providers will strengthen their ability to compete.”