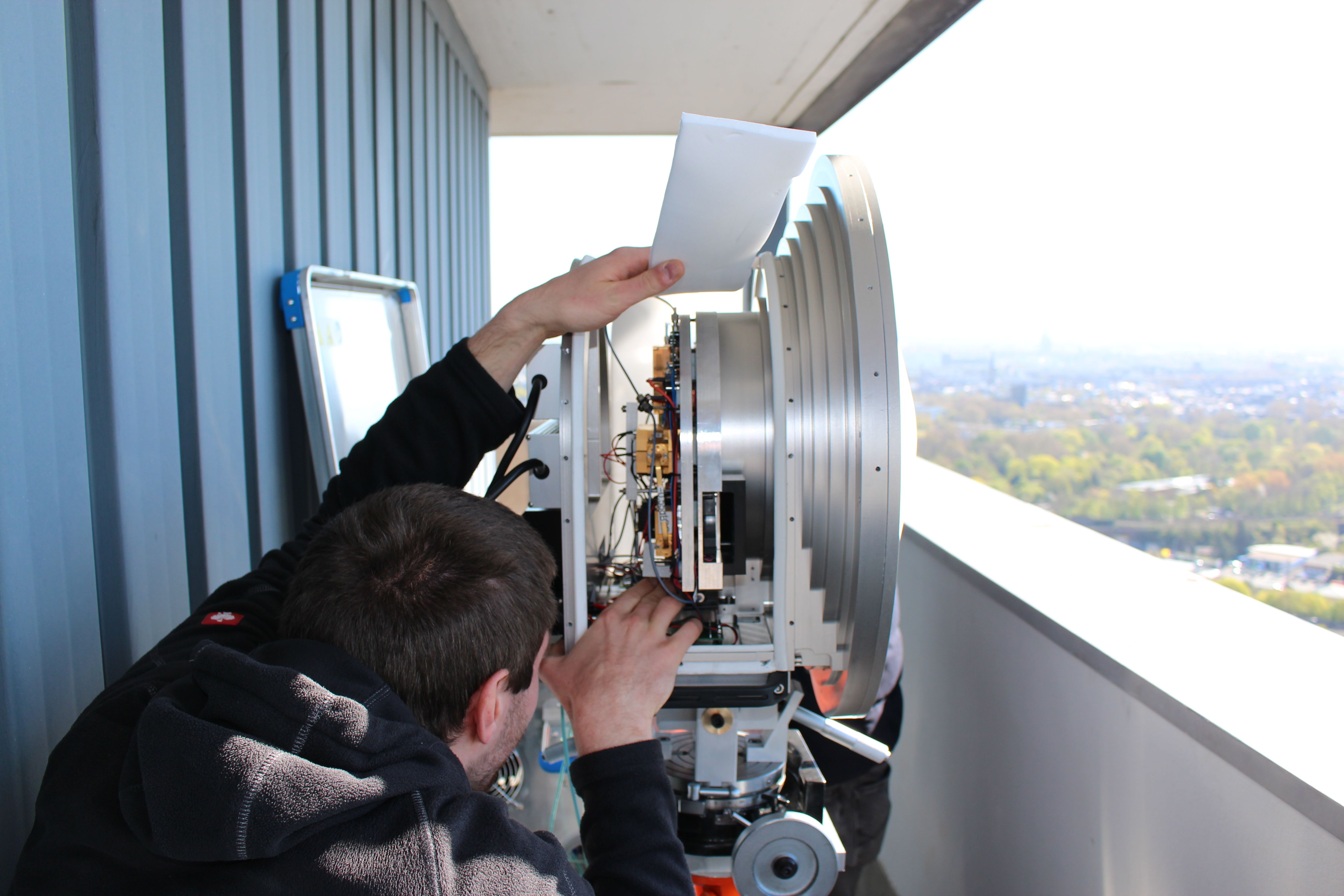 Transmitting the contents of a conventional DVD in under ten seconds by radio transmission is incredibly fast – and a new world record in wireless data transmission. With a data rate of 6 Gigabit per second over a distance of 37 kilometers, a collaborative project with the participation of researchers from the University of Stuttgart and the Karlsruhe Institute of Technology (KIT) exceeded the state of the art by a factor of 10.

The team achieved the record data transmission on a stretch between Cologne and the 36.7 km distant town of Wachtberg. The stations were located on the 45-story Uni-Centre in Cologne and the site of the Space Observation Radar TIRA at the Fraunhofer Institute for High Frequency Physics and Radar Techniques FHR in Wachtberg.

The extremely high data rates of 6 Gbit/s was achieved by the group through efficient transmitters and receivers at a radio frequency of 71–76 GHz in the so-called E band, regulated for terrestrial and satellite broadcasting. Only in this frequency range of millimeter waves are the required high effective bandwidths available. Only here can the enormous data rates be realized.

The circuits are based on two innovative transistor technologies developed and manufactured by the project partner Fraunhofer IAF. In the transmitter the broadband signals are amplified to a comparatively high transmission power of up to 1 W with the help of power amplifiers on the basis of the novel compound semiconductor gallium-nitride. A highly directive parabolic antenna emits the signals. Built into the receiver are low-noise amplifiers on the basis of high-speed transistors using indium-gallium-arsenide-semiconductor layers with very high electron mobility. They ensure the detection of the weak signals at high distance.

The transmission of high quantities of data by radio over large distances serves a high number of important application areas: the next generation of satellite communication requires an ever-increasing data offload from earth observation satellites down to earth. Supplying the rural area and remote regions with fast Internet is possible as shown in the trial. 250 Internet connections can be supplied with 24 Mbit/s ADSL. Terrestrial radio transmissions in E-band are suitable as a cost-effective replacement for deployment of optical fibre or as ad-hoc networks in the case of crises and catastrophe, and for connecting base stations in the backhaul of mobile communication systems.

ACCESS was finished on April 30 2016 and is being continued in the follow-up project ELIPSE (E Band Link Platform and Test for Satellite Communication). The aim is the next generation of communication systems for the fast connection of satellites. A further application, however, also lies in terrestrial fixed wireless links.

Along with the University of Stuttgart, the Fraunhofer Institute for Applied Solid State Physics IAF, and the Karlsruhe Institute of Technology (KIT), the industrial partner Radiometer Physics is involved. The project was funded by the Federal Ministry for Economy and Energy on the basis of a resolution by the German Bundestag. Support was provided by Fraunhofer FHR, the Uni-Centre Cologne and the Südwest-Rundfunk (SWR), who granted access to their buildings.