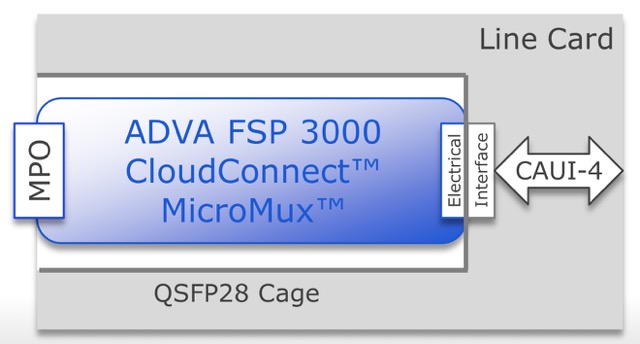 ADVA Optical Networking has put a multiplexer inside a QSFP28 module to expand the 10- and 40-gigabit client-side signals supported by its CloudConnect data centre interconnect platform.

Such platforms are designed to deliver terabits of transport capacity in a compact, power-efficient design. But this poses a challenge as the front panel of such platforms can only fit so many lower-rate 10- and 40-gigabit client-side interfaces.

ADVA Optical Networking has tackled the problem with its MicroMux module that plugs into the front panel of the CloudConnect and funnels either 10, 10-gigabit ports or two, 40-gigabit ports into a 100-gigabit port.

“The MicroMux allows you to support legacy client rates without impacting the panel density of the product,” said Jim Theodoras, vice president of global business development at ADVA Optical Networking.

Using the pluggables, a 5-terabit CloudConnect configuration can support up to 520, 10 Gigabit Ethernet ports, according to the company.

The first products will be shipped to preferred customers in the third quarter while general availability is planned for the year-end.

The Open Optical Line System is a concept being promoted by the Internet content providers to allow them greater control of their optical networking requirements.

“The key part of the Open Optical Line System is the software,” said Theodoras. “The software lets an optical line shelf be its own separate node; an individual network element.”

The data centre operator can then manage the standalone CloudConnect Open Optical Line System product. Such a product can take coloured wavelength inputs and provide feedback with the source platform, so that the wavelength is tuned to the correct channel.

“Two years after Microsoft first talked about the concept at OFC, here we are today fully supporting it,” said Theodoras.