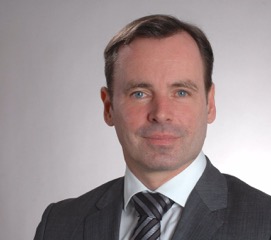 Sicoya has developed a tiny silicon photonics modulator which it is using to design chip-to-chip optical interfaces.

The German start-up believes such optical chips – application-specific photonic integrated circuits or ASPICs – will be needed in the data centre, first for servers and then switches and routers. “The trend we are seeing is the optics moving very close to the processor,” said Sven Otte, Sicoya’s CEO.

Vertical-cavity surface-emitting lasers are used for embedded optics placed alongside chips. VCSELs are inexpensive to make, says Otte, but they need to be packaged with driver chips. A VCSEL also needs to be efficiently coupled to the fibre which requires separate lenses.

”These are hand-made transceivers with someone using a microscope to assemble,” said Otte. “But this is not scalable if you are talking about hundreds of thousands or millions of parts.”

Silicon photonics requires two separate chips. The photonics is made using an older CMOS process with 130nm or 90nm feature sizes due to the relatively large dimensions of the optical functions, while a more advanced CMOS process is used to implement the electronics –  the control loops, high-speed drivers and the amplifiers – associated with the optical transceiver. If an advanced CMOS process is used to implement both the electronics and optics on the one chip, the photonics dominates the chip area.

Sicoya is adopting a single-chip approach, using a 130nm silicon germanium BiCMOS process technology for the electronics and photonics, due to its tiny silicon photonics modulator. “Really it is an electronics chip with a little bit of optics,” said Otte.

The start-up is not using a traditional Mach-Zehnder modulator or the much smaller ring-resonator modulator. Sicoya has developed its own modulator type, dubbed a node-matched diode modulator. The modulator is based on a photonic crystal; a device with a periodic structure which blocks certain frequencies of light. Sicoya’s modulator acts like a Fabry-Perot resonator and uses an inverse spectrum approach. Operating based on the inverse spectrum also results in Sicoya’s modulator having a much lower loss, said the company.

The start-up is working with the German foundry IHP to develop its technology and claims its modulator has been demonstrated operating at 25 gigabit and at 50 gigabit. But the start-up is not yet ready to detail its ASPIC designs nor when it expects to launch its first product.

Sicoya raised €3.5 million ($3.9 million) towards the end of 2015. Many of the company’s dozen staff previously worked at the Technical University of Berlin. The company’s staff is expected to grow to 20 by the year end.