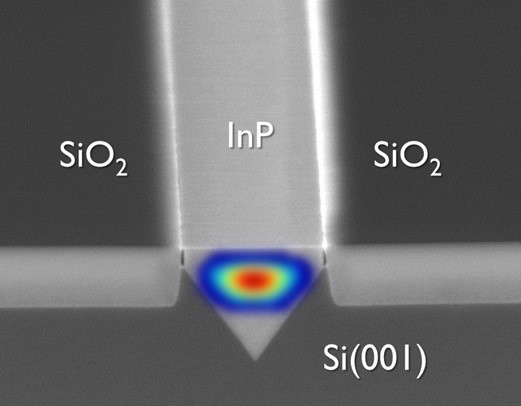 “Monolithic integration offers the best scalability once you can grow III-V [material] and do wafer-scale processing,” said Professor Dries Van Thourhout of Ghent University. “But it is also the most challenging to implement in terms of pure physics.”

Depositing indium phosphide on a silicon wafer is challenging because the different crystal structure of the two materials causes defects. Imec and Ghent University cannot stop such defects but have confined them by depositing the indium phosphide in pre-etched v-shaped grooves.

The challenge, however, is the small amount of indium phosphide material available since the v-groove slots are only 300 to 500 nm wide. “We have these [narrow] slots and we have to adapt the laser design accordingly,” said Van Thourhout. To get the laser array to lase, an external 20nm laser is used, while the output of each laser is 10 mW.

The lasers operate in the 910 nm to 930 nm region. For the lasers to work at 1,300 nm and 1,550 nm wavelengths, another material such as indium gallium arsenide will need to be grown on top of the indium phosphide.

However,  the main challenge remains how to use electronic injection to drive the lasers. This requires a PIN junction to be integrated on-chip to inject carriers into the laser, and that will require electrical contacts which must not induce optical loss in the laser.

Ghent University says the advent of monolithic lasers will complement existing discrete and hybrid laser techniques for silicon photonics rather than replace them.

“The only way to make something like this very cheaply is by a very high degree of integration,” said Van Thourhout, citing CPU to memory links as one example.